The old wives’ tale about black powder firearms and felons 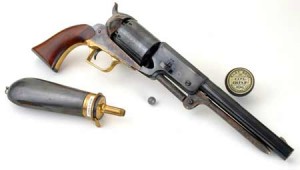 UPDATE:  As of July 1, 2017 this article no longer accurately reflects current Virginia law.

It seems like I hear the question at least once a week.

And often when I answer the question for a client, I will get a call back from their friend/brother/cousin who will tell me that I am wrong because they have been told differently by their local game warden/deputy/gun store owner.

It is a misconception that simply will not die.

The fact that both federal and state law exempts certain black powder firearms from specific regulations is at the heart of the confusion.

Let’s look at the details.

‘Antique firearm’ is specifically exempted from the definition.  But what exactly does that term mean?  Further in the same code section, we find the following:

Note that even under federal law, any firearm “which can be readily converted to fire fixed ammunition by replacing the barrel, bolt, breechblock, or any combination thereof” is not considered an ‘antique firearm’ and would be considered a ‘firearm’ for purposes of federal prohibitions.  The same is true for any firearm that incorporates the frame or receiver of a firearm such as a Remington 870 with a muzzle loading barrel or a Thompson Contender.

But even if the black powder firearm in question does not meet the definition of ‘firearm’ for purposes of applying federal prohibitions, we still have state law to consider.

In Virginia, the definition of ‘firearm’ is contained in a number of statues, including those governing when a background check needs to be performed.  But interestingly enough, it does not provide a definition in § 18.2-308.2 which governs possession by those convicted of a felony.  This leaves us looking to case law to determine the answer.

People will often erroneously cite to the 1997 case of Miller v. Commonwealth 492 S.E.2d 482 as proof that black powder firearms are not denied to convicted felons but this is an incorrect reading of the holding.  In Miller, the defendant did initially raise the issue of what constitutes a ‘firearm’ for purposes of § 18.2-308.2 but later dropped that issue, and the court ultimately overturned his conviction based upon a due process argument.

Code § 18.2-308.2 prohibits a felon from possessing a device that has the actual capacity to do serious harm because of its ability to expel a projectile by the power of an explosion, and it is not concerned with the use or display of a device that may [merely] have the appearance of a firearm.

“[i]n a prosecution under Code § 18.2-308.2, once the Commonwealth proves the accused is a convicted felon who possessed an object made to ‘expel a projectile by the combustion of gunpowder or other explosive,’ then it has proven all the necessary elements of the crime based on the plain language of the statute.”

So … the answer is “No!  A convicted felon may not possess black powder firearms, even those that match the definition of antique firearms under Virginia law, such that they are sold without a background check.”

If you are a convicted felon who wishes to regain his or her right to possess firearms then I will be glad to discuss representing you in petitioning the court for restoration of your rights.