Are folding stocks legal in Virginia? 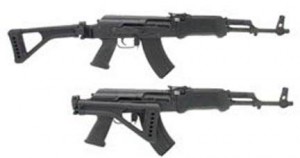 Every so often I get an email or a phone call from someone who is convinced that folding stocks are illegal in Virginia.

Just to be clear … these people are wrong. Folding stocks are certainly legal in Virginia!

So why does this rumor persist?  I suspect it is because there are a few statutes which specifically do reference “folding stock” in defining certain prohibited conduct.

We will start with § 18.2-308.7 of the Code of Virginia which prohibits the possession of so-called “assault weapons” by “any person under 18 years of age.”

In this code section, they define an “assault weapon” based upon a number of possible physical characteristics, one of which is “any semi-automatic centerfire rifle or pistol which expels single or multiple projectiles by action of an explosion of a combustible material and is equipped at the time of the offense with … a folding stock.”

However, this prohibition only applies to those under 18, has numerous other exceptions, and does not, as a general proposition, make folding stocks illegal.

We next turn to § 18.2-287.4 of the Code of Virginia which prohibits the carry of certain loaded firearms, by non-permit holders, in certain jurisdictions.

“It shall be unlawful for any person to carry a loaded (a) semi-automatic center-fire rifle or pistol that expels single or multiple projectiles by action of an explosion of a combustible material and is equipped at the time of the offense with a magazine that will hold more than 20 rounds of ammunition or designed by the manufacturer to accommodate a silencer or equipped with a folding stock or (b) shotgun with a magazine that will hold more than seven rounds of the longest ammunition for which it is chambered on or about his person on any public street, road, alley, sidewalk, public right-of-way, or in any public park or any other place of whatever nature that is open to the public in the Cities of Alexandria, Chesapeake, Fairfax, Falls Church, Newport News, Norfolk, Richmond, or Virginia Beach or in the Counties of Arlington, Fairfax, Henrico, Loudoun, or Prince William.”

This code section has caused a great deal of confusion over the years.  However, it is extremely limited in its scope, only applies to carry of a loaded firearm (not purchase or ownership), does not apply to permit holders, and does not, as a general proposition, make folding stocks illegal.

Finally we look at § 18.2-308.8 which prohibits ownership of “Striker 12 Streetsweepers.” It further extends this prohibition to “any semi-automatic folding stock shotgun of like kind with a spring tension drum magazine capable of holding twelve shotgun shells.”

Again, you have to read all of the elements of the prohibition.  It does not generally prohibit folding stocks on shotguns but only applies to those that:

b)  Have a spring-tension magazine; and

c)  The magazine is capable of holding twelve shotgun shells.

At the risk of repeating myself, this statute only prohibits a single specific type of firearm, and does not, as a general proposition, make folding stocks illegal.