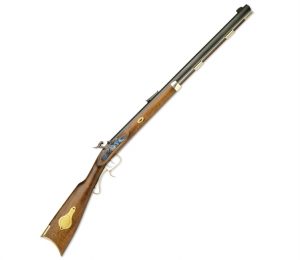 Last year I wrote an article admonishing those with felony convictions to not believe the oft-repeated rumor that felons can still possess, and hunt with, black powder firearms.

In that article I noted that, while ‘antique firearms’ are not prohibited to felons under federal law, Virginia state law still (at that time) prohibited it.

However, during the 2017 legislative session, Senator Mark Obenshain introduced a bill to correct that discrepancy (SB1533). His bill was subsequently signed into law by the governor and, with little fanfare, went into effect on July 1, 2017.

With the passage of this bill, § 18.2-308.2, which is the code section denying convicted felons the right to possess firearms generally, now has a subsection C2 which reads:

So let’s break this down.  Does this mean that any felon can own any black powder firearm?  The answer is a resounding No!

There are two limitations on the new law that felons will still need to review carefully before rushing out to buy a black powder firearm:

Limitation #1)  Are they truly considered a non-violent felon under the new law?

In the new subsection we are given two code references to define ‘act of violence’ and ‘violent’ felony.

Under § 19.2-297.1, an “act of violence” means any one of the following crimes (whether convicted as a principal, accessory before the fact, or in conspiracy):

a. First and second degree murder and voluntary manslaughter under Article 1 (§ 18.2-30 et seq.);

Under § 17.1-805, a ‘violent felony’ encompasses an incredible number of criminal offenses.  I will not enumerate them each individually here because it would render the article too long but I will point out that the list does contain offenses which a reasonable person might not consider to be violent, such as ‘damaging a railroad signal’.

If you are a convicted felon who has not had their firearm rights restored and are planning to purchase an ‘antique firearm’ based upon this new legislation, I would urge you, in the strongest possible terms, to review your convictions against this list before doing so.

Limitation #2) Does a particular black powder firearm meet the definition of ‘antique firearm’?

We see in the statutory language above that the definition of ‘antique firearm’ can be found in subsection G of § 18.2-308.2:2 which states that:

1. Any firearm (including any firearm with a matchlock, flintlock, percussion cap, or similar type of ignition system) manufactured in or before 1898;

2. Any replica of any firearm described in subdivision 1 of this definition if such replica (i) is not designed or redesigned for using rimfire or conventional centerfire fixed ammunition or (ii) uses rimfire or conventional centerfire fixed ammunition that is no longer manufactured in the United States and that is not readily available in the ordinary channels of commercial trade;

4. Any curio or relic as defined in this subsection.

“Curios or relics” means firearms that are of special interest to collectors by reason of some quality other than is associated with firearms intended for sporting use or as offensive or defensive weapons. To be recognized as curios or relics, firearms must fall within one of the following categories:

1. Firearms that were manufactured at least 50 years prior to the current date, which use rimfire or conventional centerfire fixed ammunition that is no longer manufactured in the United States and that is not readily available in the ordinary channels of commercial trade, but not including replicas thereof;

2. Firearms that are certified by the curator of a municipal, state, or federal museum that exhibits firearms to be curios or relics of museum interest; and

3. Any other firearms that derive a substantial part of their monetary value from the fact that they are novel, rare, bizarre, or because of their association with some historical figure, period, or event. Proof of qualification of a particular firearm under this category may be established by evidence of present value and evidence that like firearms are not available except as collectors’ items, or that the value of like firearms available in ordinary commercial channels is substantially less.

The section I have underlined above is of particular concern to me as an attorney.  There are a number of black powder firearms (mostly revolvers) which have commercially available drop-in conversion kits that allow them to fire fixed ammunition.  Under this definition, once such a conversion kit becomes commercially available for a given firearm it would no longer meet the definition and would still be barred from ownership and use.

Once again, I would caution those who are planning to take advantage of this change in the law to shop carefully when selecting their ‘antique firearm’.

This is a good bill that goes a long way toward correcting the discrepancy that previously existed between Virginia and federal law on this topic.  However, it requires those wishing to avail themselves of its benefits to do a significant amount of research beforehand.  Failure to do so could place said person in danger of a charge of ‘felon in possession’.

I will end by noting that, if you have a non-violent felony, I would encourage you to contact me for a free consultation to discuss petitioning the court for a full restoration of your firearm rights.