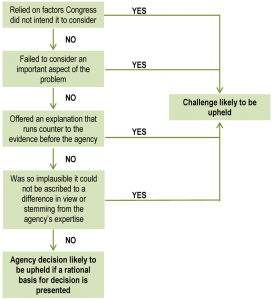 I received a call today from a client who had just read my article about the ATF’s open letter concerning the stabilizing brace issue.  He was coming to the issue late but was incensed that the ATF was reversing their previous position.

He asked me if the NFA community was “going to take this lying down.”  I told him I expected that several manufacturers were exploring their legal options.

I spent a few minutes trying to explain the basics of administrative law and how an agency ruling can be challenged as ‘arbitrary and capricious’ but went on to caution that the courts will grant significant deference to agency action.

It turns out that Sig Sauer at least is definitely considering such a challenge.  They released the following press release this afternoon.

NEWINGTON, N.H. (January 21, 2015)—SIG SAUER, Inc., has issued the following statement about the recent opinion by the Bureau of Alcohol, Tobacco, Firearms and Explosives (ATF) in regard to the SB15 and SBX pistol stabilizing braces.

“As reaffirmed in an Open Letter by ATF’s Firearms and Ammunition Technology Division dated January 16, 2015, the Pistol Stabilizing Brace (SB15 and SBX) is legal to own, legal to purchase, and legal to install on a pistol. SIG SAUER® believes that the PSB improves the single-handed shooting performance of buffer tube equipped pistols, and offers the product both as an accessory and pre-installed on a number of pistols.

“The Open Letter goes further to rescind a previous private letter regarding the ‘intent’ of the user of the pistol stabilizing brace. In the letter of January 16, 2015, ATF opines that a person’s actual use of the product as a shoulder stock can change the legal classification of the product. However, the Open Letter explicitly states: “ATF hereby confirms that if used as designed—to assist shooters in stabilizing a handgun while shooting with a single hand—the device is not considered a shoulder stock and therefore may be attached to a handgun without making a NFA firearm.”

“We question ATF’s reversal in position that the classification of the brace may be altered by its use. We are reviewing the legal precedents and justification for this position, and will address our concerns with ATF in the near future.”

“We will vigorously defend the classification of all of our products and our consumers’ right to use them in accordance with the law. If we find that the open letter opinion is outside the scope of the law, we will seek further review.”