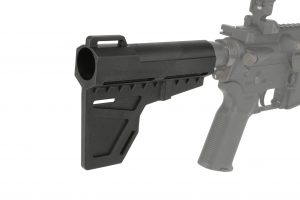 In the Fall of 2014, I wrote about a series of actions on the part of the ATF that lead me to believe that they were attempting to modify their interpretation of the stabilizing brace issue.

On January 16, 2015 the ATF issued an open letter in which they confirmed my fears.  In that letter, they put forward the position that merely shouldering a pistol equipped with a stabilizing brace constituted a ‘redesign’ of the firearm resulting in an unregistered short-barreled rifle (SBR).

That left owners and manufacturers of stabilizing braces in a state of uncertainty. Thankfully, several players in the industry challenged the open letter. On January 5, 2017, the counsel for SB Tactical, LLC sent a letter to ATF Acting Director Thomas Brandon requesting reconsideration of the position taken in the January 16, 2015 open letter.

The ATF officially responded to this request on March 21, 2017 in a letter in which they claimed they were not reversing their previous position but in effect did just that. The entire letter is embedded below but the key elements from the letter are:

They did go on to add that actions which would still constitute re-design include taking affirmative steps such as:

I encourage my clients to read the entire letter below so they understand the limits of what I hope is the ATF’s final position.  But as of now, the stabilizing brace is once again a viable alternative for occasionally shouldering your AR pistol.