Does putting a bipod on a pistol make it an AOW? 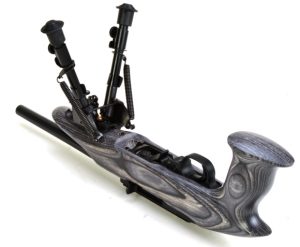 I received an email this morning from a client asking whether or not they could add a bipod to their pistol without making it an AOW.

As I have pointed out on more than one occasion, the answer to almost any legal question is “maybe”  and that is certainly the case here.

There is no ATF regulation directly on point to the ‘bipod’ question but that does not mean that we are done with our analysis.

Let’s start with some basic rules:

1) Adding a vertical foregrip to a ‘pistol’ makes it an AOW subject to NFA regulation.  See the Franklin Armory letter below.

2) If the pistol has an overall length greater than 26 inches then you can add a vertical foregrip and convert the ‘pistol’ to a ‘firearm’ in the eyes of the ATF without it being considered an AOW.  This is also covered in the Franklin Armory letter.

For purposes of this analysis, I am going to assume that we are dealing with a pistol that has an overall length less than 26 inches.

Now we turn to the question of whether or not a bipod can be considered a ‘vertical foregrip’ for purposes of applying rule #1 above.

As my client pointed out in his email, the Ruger Charger 10/22 pistol comes from the factory with a bipod and is not classified as an AOW.  Therefore we do know that at least some types of bipods are allowable.

But does this hold true for all bipods?  No it does not.

The most obvious example of a bipod that would be considered to also be a vertical foregrip is the aptly named Grip Pod pictured below. 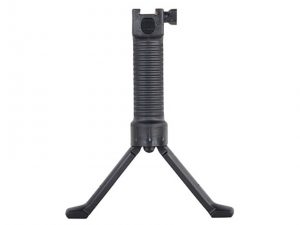 This is a bipod that can also serve as a vertical foregrip and therefore would cause a pistol to which it was attached to be considered an AOW.

But not all examples are so clear-cut.  While we do not have a detailed ruling on the issue from the ATF, if a given bipod is capable of being folded into a stable configuration approximating a vertical foregrip then I believe ATF would consider it violative of the rule against vertical foregrips.

Finally, I believe that ATF would probably apply the same logic from the stabilizing brace issue to this question.  In that case, the ATF held that “[s]ince the pistol stabilizing brace was neither ‘designed’ nor approved to be used as a shoulder stock, use as a shoulder stock constitutes a ‘redesign’ of the device because a possessor has changed the very function of the item.”

So … where does that leave us?

I believe the best summary would be as follows:

Use of any bipod that has a built in grip or the capability to be folded into a stable configuration approximating a vertical foregrip would potentially expose the owner to a charge of violating the NFA.  The same would probably be true of any person who uses an otherwise legal bipod as a vertical foregrip despite its intended purposes and design.

Outside of those two broad categories, a bipod is perfectly legal for use on a pistol.