What does the 2019 election mean to Virginia gun owners and FFLs? 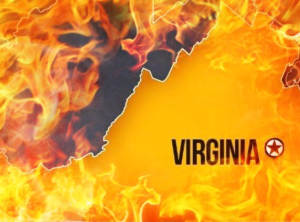 Since the 2019 election, my phone has been ringing non-stop.  Gun owners and dealers have heard the Governor and the newly-elected majority bragging about their plans to decimate the right to keep and bear arms in the Commonwealth and they are rightfully concerned.  The question on everyone’s mind is “What does the 2019 election mean to Virginia gun owners and FFLs?”

Many people have expressed an intent to move out of state.

Others are insisting that they will not comply with any new laws that infringe upon the rights of law-abiding gun owners.

Dealers are asking whether  it is worth it to keep their SOT or make new investments in their business.

Buyers are asking whether they should even bother completing Form 4s for newly purchased suppressors.

Other, more pragmatic, callers are asking focused questions about the scope of the proposed laws, whether there will be any grandfathering, or if there will be compensation for items banned.

But all of them share one thing in common … they want to understand just how bad the legal environment will be after the 2020 session and want advice on what to do.

I, as a gun owner myself, understand and share in these concerns.  While it is clear that gun-owners are going to be the stalking horse for all the problems faced by this administration, my short-term advice is this … “for now act as if nothing has changed.”

1)  The bills that were introduced during the special session were intended to make a political statement rather than to present actual effective legislation.  They were a kitchen-sink of gun control items to distract from the scandals plaguing the Governor and Lt. Governor and to secure the support of gun-control groups for the 2019 election.  We will certainly see the same proposals again but the ones that will be introduced in the Spring will almost certainly have key differences and until we see those differences, we cannot evaluate the effects and chances at passage.

2)  After the special session failed to yield any results, the Virginia State Crime Commission conducted hearings on the proposals to study what effect they each might have on actual crime in the Commonwealth.  The Virginia State Crime Commission is bi-partisan and should be counted upon to deliver advice that actually speaks to the real data concerning the various proposals.  For example, that suppressors do not ‘silence’ a firearm any more than a muffler silences a dump truck.  It merely reduces the sound so that hearing protection can more adequately protect a shooter’s hearing.

3)  There are those in the governor’s party who are ‘moderates’ (or who at least act moderate due pressure from their constituents) and who will not be willing to support some of the more draconian of his proposals.  Any findings from the Crime Commission will provide political cover to these ‘moderates’.  It is my hope that the proposed suppressor ban in particular may fall due to this combination.  I hope it may also be a stumbling block to the ‘assault firearm’ ban, at least in its current form.

4)  Even if some, or all, of the governor’s proposals are signed into law, the versions passed will of necessity almost certainly have elements of grandfathering, phase-in periods, etc., and will not take effect until July 1, 2020.  And even then, I fully anticipate that VCDL, NRA, GOA, and possibly other gun rights groups will be mounting legal challenges that may result in the laws being delayed in implementation.  All of this gives those who may wish to move their families or collections out of state plenty of time to react after we know the actual details of what we are facing and can craft appropriate solutions.

NOTE:  I have been asked several time whether these could be passed as Emergency Legislation and therefore go into effect prior to July 1.  The answer is a resounding “No”.

Pursuant to Article 4, § 13 of the Virginia Constitution as well as § 1-214 of the Code of Virginia, they would require a four-fifths vote of the members in each house of the General Assembly and they do not have anywhere close to that kind of support.

5)  If gun owners stop participating in the firearms economy now for fear of what might happen then they will end up destroying those businesses who have invested their lives in the industry.  It would be truly short-sighted for gun owners to destroy the industry by non-participation before any bills are even re-introduced.  Instead, support your local gun shop, add to your collection, stock up on accessories!

6) We are seeing a groundswell of localities that are passing “Second Amendment Sanctuary” resolutions which promise non-enforcement of unconstitutional laws. Given the number that have already adopted such resolutions and the number scheduled for debate, it is extremely likely that by January 8th when the session officially starts, over 75% of all localities will have passed such resolutions.  Politicians, even ideologues, respect only two things, money and numbers.  Such an unprecedented groundswell will give pause to all but the most ardent supporter of civilian disarmament.  See the latest map below: 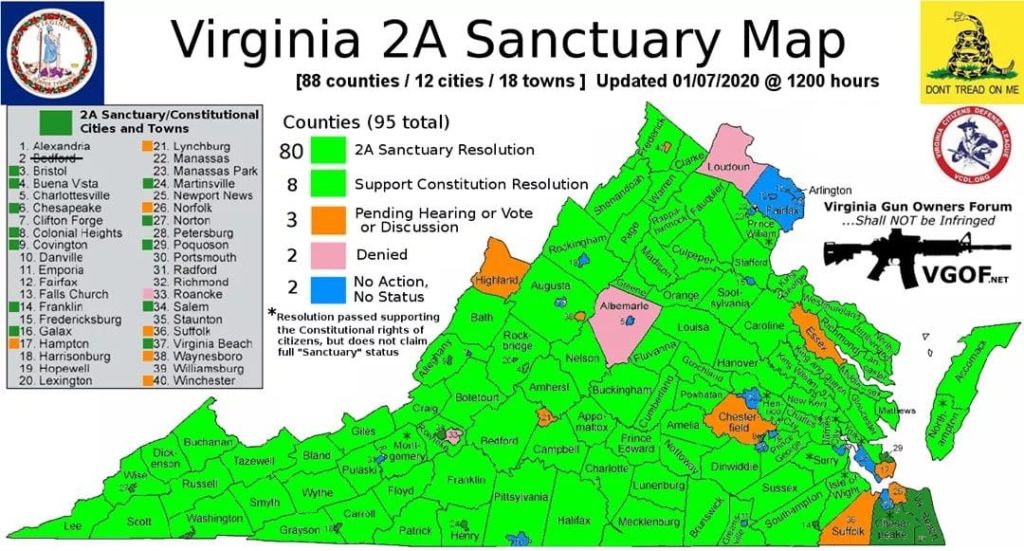 Please understand that this advice is merely meant to answer the questions we are all facing in the days following the election.  I am not saying that gun owners should stick their heads in the sand.  Nor am I saying that things will be fine.  They most certainly will not be fine.  We are facing a focused attempt to destroy the traditions of shooting sports in the Commonwealth. However, we need to continue to fight within the political and legal channels available to us to try and minimize the impact.

I will update this post as more information becomes available.

Take Action in The Meantime

In the meantime, people want to know what they can do.  With the full disclosure that I am an unpaid member of the Board of Directors of VCDL, I suggest the following:

3) Contact your Senator and Delegate and tell them you expect them to oppose these bills.

5)  Work to have your locality pass a Second Amendment Sanctuary resolution.  While the effect of these is largely symbolic, they send a powerful message to the incoming majority that any attempt at banning or confiscating firearms will run counter to the will of the majority of Virginians.  You may download the VCDL Model Resolution here.

6) Encourage your friends and family members do repeat these steps.