Is it legal to carry an expandable baton in Virginia? 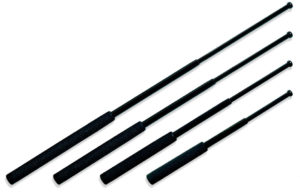 “Is it legal to carry an expandable baton in Virginia?”  I was asked this question today and thought it would make a good article.

As is often the case with seemingly simple questions like this one, there are nuances that must be addressed.  Let’s unpack all the hidden details of this question.

An ‘expandable baton’, is a nested series of metal or composite rods that can be extended with manual effort, usually the flick of a wrist.  They have no mechanical assistance in expanding.

There is a similar device which expands with a spring that the user can actuate.  For purposes of this analysis, this is not an ‘expandable baton’ but rather a ‘spring stick’.

The legal definition of a ‘spring stick’ is found in § 18.2-307.1, which defines it as “a spring-loaded metal stick activated by pushing a button that rapidly and forcefully telescopes the weapon to several times its original length.”

Now that we have our definitions in order, we can continue unpacking the other issues involved in answering the question.

In order to ‘carry’ an item, you must be able to purchase and possess it. This additionally implies that it must be legal for the item to be sold to you in the first place. So we will first look to see if there is any legal prohibition on the sale, purchase, or possession of expandable batons in Virginia.

If any person sells or barters, or exhibits for sale or for barter, or gives or furnishes, or causes to be sold, bartered, given or furnished, or has in his possession, or under his control, with the intent of selling, bartering, giving or furnishing, any blackjack, brass or metal knucks, any disc of whatever configuration having at least two points or pointed blades which is designed to be thrown or propelled and which may be known as a throwing star or oriental dart, switchblade knife, ballistic knife as defined in § 18.2-307.1, or like weapons, such person is guilty of a Class 4 misdemeanor. The having in one’s possession of any such weapon shall be prima facie evidence, except in the case of a conservator of the peace, of his intent to sell, barter, give or furnish the same.

Given that an expandable baton is not in any way a blackjack, which is a flexible, leather-covered hand weapon that has a handle on one end and is weighted on the other, there is nothing in this statute which could be read to prohibit the sale, barter, or transfer of an expandable baton.

So now we are back to the heart of our question … “Is it legal to carry an expandable baton in Virginia?”

When we talk about carry of a self-defense item, we often distinguish between open and concealed carry.  We do this for the simple reason that there are many items that are legal to carry when they are not concealed but are illegal to carry concealed … even with a permit.

And that bring us to one of the common misconceptions I encounter.  Many people still believe that Virginia issues a ‘Concealed Weapons Permit’.  While that used to be the case, it is now a ‘Concealed Handgun Permit’ and no longer allows other enumerated weapons to be carried concealed upon the person.

Having set the stage for our analysis, we have two questions we need to ask. “Is there a law making it illegal to possess or carry an expandable baton openly, and, if not, are they among the enumerated list of items that cannot be carried concealed upon the person?”

The answer to the first question is “no”.  There is no law in Virginia making it illegal to openly carry an ‘expandable baton’.

(i) any pistol, revolver, or other weapon designed or intended to propel a missile of any kind by action of an explosion of any combustible material;

(iii) any flailing instrument consisting of two or more rigid parts connected in such a manner as to allow them to swing freely, which may be known as a nun chahka, nun chuck, nunchaku, shuriken, or fighting chain;

(iv) any disc, of whatever configuration, having at least two points or pointed blades which is designed to be thrown or propelled and which may be known as a throwing star or oriental dart; or

Since we have already discussed the definitional differences between an ‘expandable baton’ and a ‘blackjack’ or ‘spring stick’, the only possible provision which might be used to prosecute the concealed carry of an expandable baton is subsection (v) which broadly sweeps in weapons “of like kind.”

The question then becomes whether an officer or Commonwealth’s Attorney could possibly consider an expandable baton which extends manually via a flick of the wrist to be “of like kind” with a spring-loaded stick that actuates by the push of a button.

I believe any such attempt would strain credulity but I would be remiss in my duty if I didn’t note that it is not impossible that such an attempt could be made.  I have done a cursory search of case law and have found no such cases but it was not an exhaustive search.

So … “Is it legal to carry an expandable baton in Virginia?”  I believe the answer is “yes” with the qualifications noted in the previous section.

Disclaimer:  This information is presented for educational purposes only and does not give rise to an attorney-client relationship. Additionally, I am licensed to practice law in the Commonwealth of Virginia and this answer may not be appropriate for other states. If you have further questions about this topic, please feel free to contact me for a free consultation.