Can felons hunt with crossbows in Virginia? 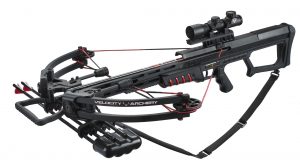 I have written before about the rampant confusion surrounding the issue of whether or not felons can possess, and hunt with, black powder firearms in Virginia.

But there is a separate question that comes up almost as often and that is whether or not felons can possess, and hunt with, crossbows.

I believe that part of the confusion is based upon the fact that crossbows were not allowed to be used for hunting by anyone in Virginia until 2005, except in the case of hunters “whose physical disabilities prevent[ed] them from hunting with conventional archery equipment.”

Because of this, many people seem to mentally separate crossbows from conventional bows and assume that they are regulated more like firearms (which are prohibited to felons whose gun rights have not been restored).  But is that correct?

As always, when we are discussing an issue of ‘firearms’ law, we have to examine both state and federal law.  So let’s start by looking at federal law.

So … since crossbows use stored potential energy to propel an arrow rather than the action of an ‘explosive’ (or rapidly burning propellant), they are not prohibited to felons under federal law.

But we still have state law to consider.

I will start by noting that there are no statutes which specifically prohibit crossbows to felons in the Code of Virginia.  So we need to determine if they are swept into the state definiton of ‘firearms’.

In Virginia, the definition of ‘firearm’ is contained in a number of statues, including those governing when a background check needs to be performed (§ 18.2-308.2:2).  Under this code section, we see a definition of “firearm” that closely matches the federal definition.

“Firearm” means any handgun, shotgun, or rifle that will or is designed to or may readily be converted to expel single or multiple projectiles by action of an explosion of a combustible material.

Once again we find that crossbows do not meet this definition.  But we are not done yet. As always, we end our analysis by looking at case law.

After reviewing the holdings of the Virginia Supreme Court, Court of Appeals, and Circuit Courts, I am unable to find any case law which could even tangentially be read to imply that crossbows are considered ‘firearms’ under Virginia law or that they are denied to those convicted of a felony.

In summary, it appears that, in Virginia, there are no statutory bars to the lawful purchase or possession of crossbows by convicted felons.  This would include their use for lawful hunting.

NOTES:  The one caveat I must add is that, for those still on supervised probation, there may be conditions of probation which would change this analysis.

If you are a convicted felon who wishes to regain his or her right to possess firearms then I will be glad to discuss representing you in petitioning the court for restoration of your rights.

If you have any other questions feel free to contact me for a free consultation.

Disclaimer:  This information is presented for educational purposes only and does not give rise to an attorney-client relationship. Additionally, I am licensed to practice law in the Commonwealth of Virginia and this answer is specific to Virginia.