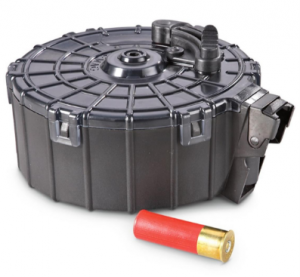 A question that arises quite frequently concerns the interpretation of the ‘like kind‘ language in the Virginia ban on Striker 12 Street Sweeper shotguns.

With the popularity of semi-auto shotguns such as the Saiga and Vepr 12, these questions are understandable.

Today I was asked this question yet again by a long-time client and I thought the answer might be of interest to others.

His questions could be paraphrased as follows:

In a Saiga or Vepr semi-auto 12 gauge shotgun with a folding stock:

Let’s start by looking at the applicable statute which is § 18.2-308.8 of the Code of Virginia.  It reads as follows:

“It shall be unlawful for any person to import, sell, possess or transfer the following firearms: the Striker 12, commonly called a “streetsweeper,” or any semi-automatic folding stock shotgun of like kind with a spring tension drum magazine capable of holding twelve shotgun shells. A violation of this section shall be punishable as a Class 6 felony.”

Breaking the prohibition down, we see that the ‘like kind‘ language requires that, in order to be prohibited, a firearm must be:

Now that we have broken down the requirements, let’s answer the 3 questions above.

I hope this clarifies the issue somewhat.  The good news is that one can take either of these shotguns (or any other semi-auto shotgun capable of holding a drum magazine) completely out of the purview of this statute by removing the folding stock and replacing it with a fixed stock.

NOTE:  This analysis governs ‘like kind‘ shotguns that are not NFA items.  As I explained in this article, the Striker 12 Street Sweeper itself is now classified as an NFA item.

ShareTweet
This entry was posted in Street Sweeper, Virginia Law. Bookmark the permalink.