Is this the end of Form 1 suppressors? 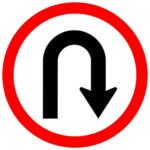 Over the last week, my phone has been ringing non-stop with questions about the ATF’s mercurial position on Form 1 suppressors.

For those of you who are not aware, here is a rough timeline of what has occurred:

December 2020 – Diversified Machine, a company that sold solvent trap kits and parts that could be used in Form 1 suppressor builds, was raided by the ATF.

December 8, 2021 – The ATF sent the following warning letter to every person in the Diversified customer and contact files.  This letter, and their expansive interpretation of 18 U.S.C. Section 921(a)(24) provided ominous foreshadowing of what was to follow. 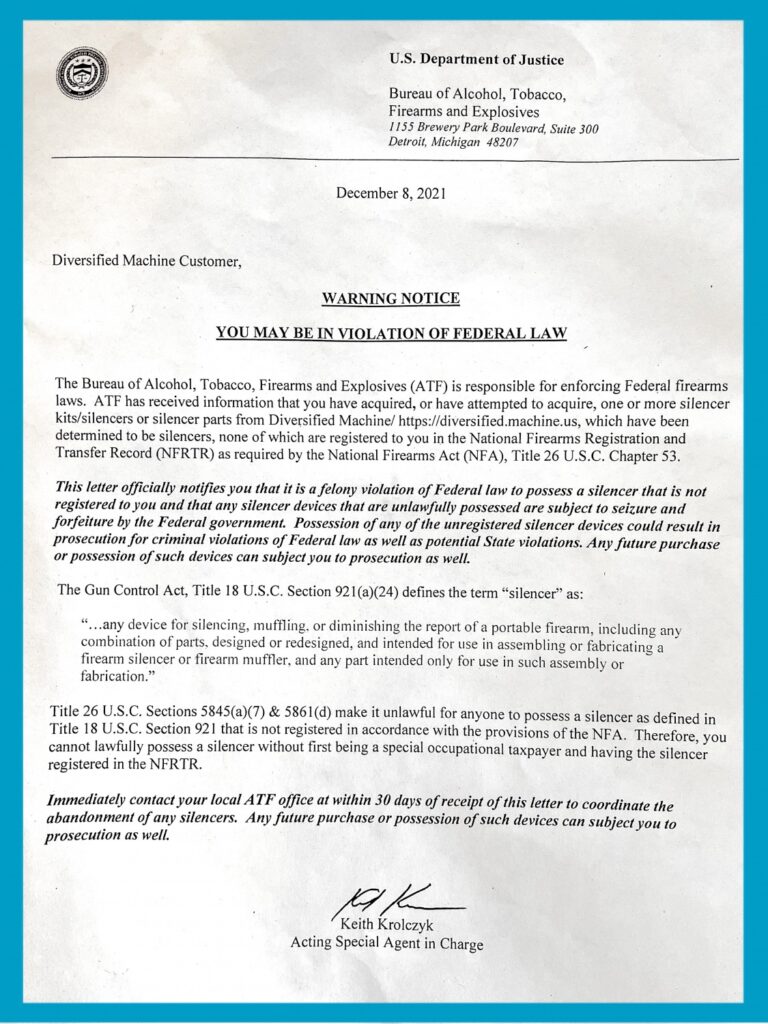 After discussions with the Detroit Field Office and ATF legal, those affected were offered several options, including submission of an approved Form 1, destruction of said items, or reporting that the item had been destroyed or discarded in the past.

While there was some discussion of any previously approved tax stamps made from Diversified kits or parts being removed from the registry (NFRTR) and being subject to seizure or surrender, this seemed at the time to be an unlikely possibility given the legal and administrative issues that would arise if an approved application, with an issued excise tax stamp, were to be retroactively removed absent any malice or intent on the part of the registrant.  However, it was mentioned as a possibility and as of the writing of the article, the final outcome remains to be seen.

February 28, 2022 – The ATF summarily disapproved hundreds of Form 1 applications, giving the following reason for the disapproval.

What we now know is that the ATF reportedly believed these applicants to be using a solvent trap kit or components that the NFA Division has determined to be illegal ‘suppressors’ under the interpretation laid out in the Diversified letter above.

I have personally looked at several of these disapproved Form 1s and am not certain in many cases how the ATF made such a determination.  However, they have reportedly sent the names and contact information of these applicants to the relevant local field offices for possible further contact.

Therefore … if you are one of these disapproved applicants and are contacted by the ATF, be polite but insist that you wish to be represented by counsel before proceeding and immediately contact me or your preferred attorney for dealing with ATF matters.

March 3, 2022 – The ATF sent emails to the majority of Form 1 suppressor applicants who had open  applications that had not been denied as part of the February 28 mass-disapproval.  This email, pictured below, had two key elements I suggest you read carefully.

The first is the footnote at the bottom of the email which states a long list of ways that an applicant, using a solvent trap kit or components that the ATF considers to be themselves suppressors under the Diversified logic, could be found criminally liable when submitting a Form 1 application.  Read this carefully once, and then read it again!  This is the clearest statement yet of the rules and potential consequences that applicants will face moving forward.

The second key element that stands out in this email is the list of requested additional information that will need to be submitted for these applications (and presumably all future suppressor Form 1s) if it is to be processed.

The request for part level detail seems to have a dual purpose.  It will allow the ATF to deny those applications where the applicant is not machining their own suppressor but rather using a kit or components to ‘make’ one in a way that the ATF has now decided is impermissible.  But more concerningly, it will provide the ATF a list of companies that have been providing these types of kits and components for future administrative or criminal proceedings.  Perhaps these companies will be seized just as Diversified was, with their customer and contact records being used to target additional suppressor owners who believe they have complied with the already onerous NFA process.

So … should you submit the required information to the ATF?  That answer varies from person to person based upon the specifics of each build.  However, if the basis of your build is a kit or internal components that you have ordered rather than made, then I do not believe your application will be approved even if you attempt to comply.

Alternatively, the email also offered the option to simply not reply by March 25th and the application would be automatically denied and a refund issued for the $200 excise tax  payment.  In most, but not all cases, this will be the direction I advise my client to take.  If you wish to review your scenario, please contact me or your preferred attorney for dealing with ATF matters. 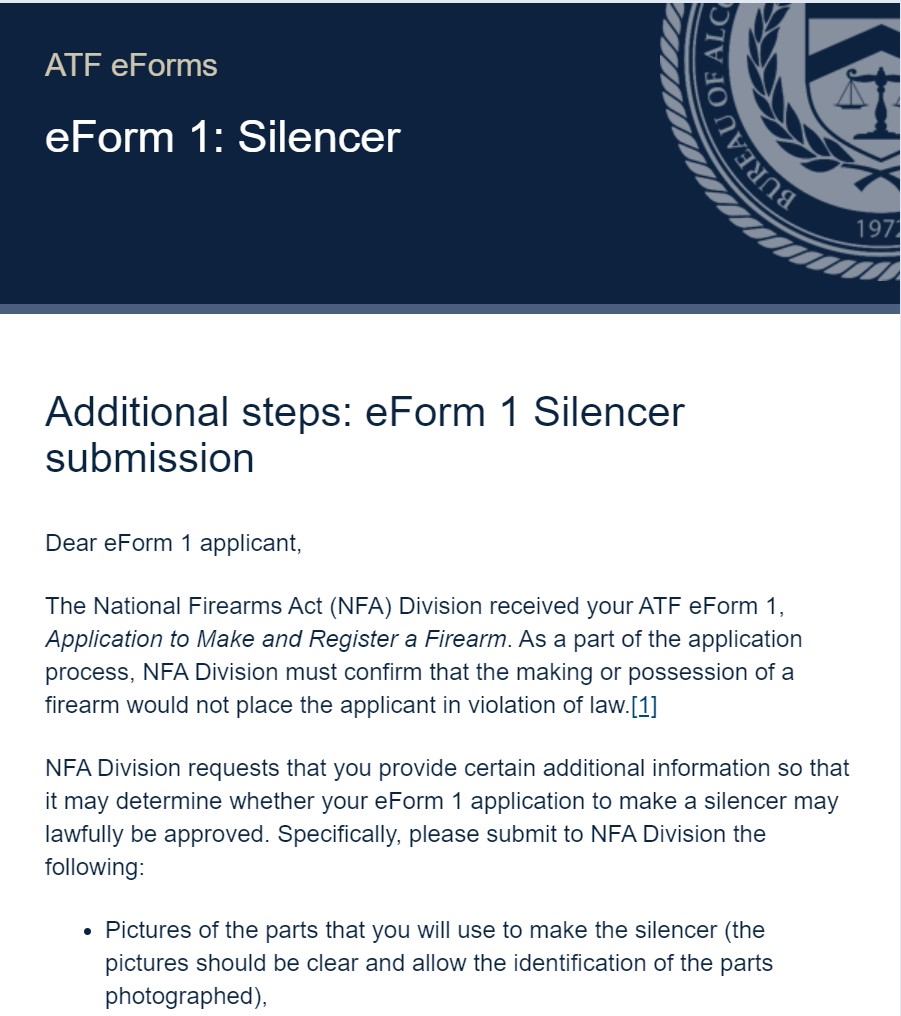 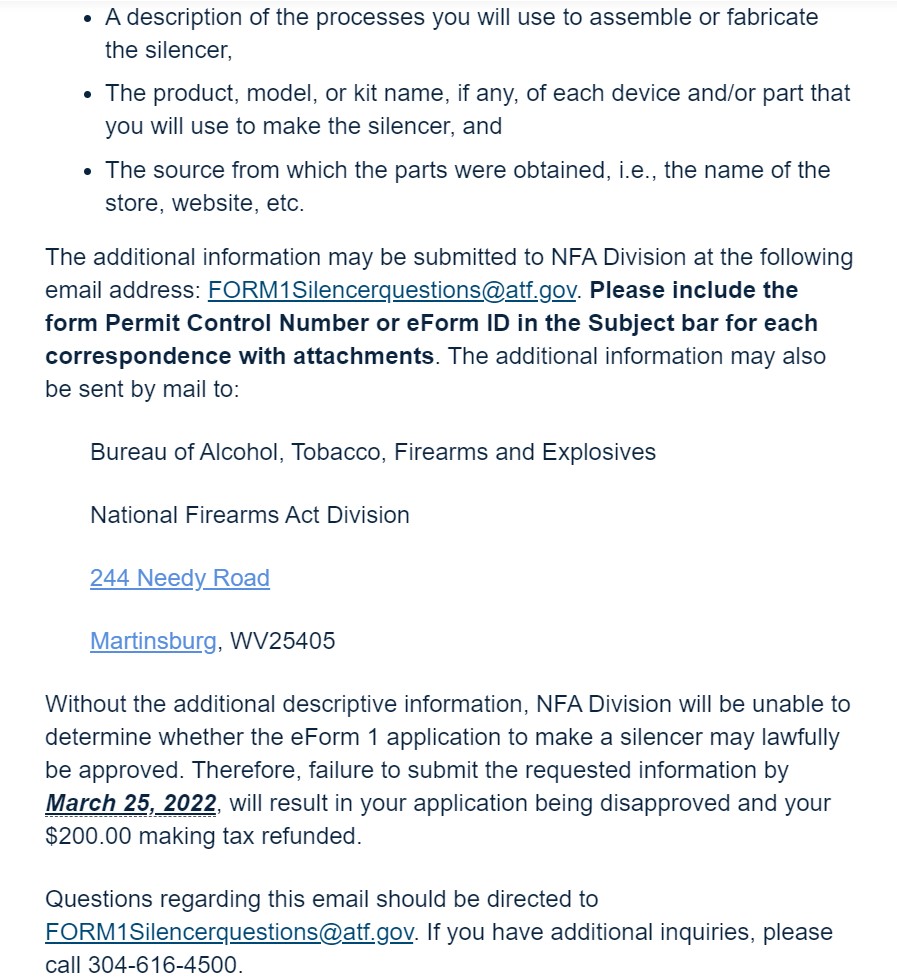 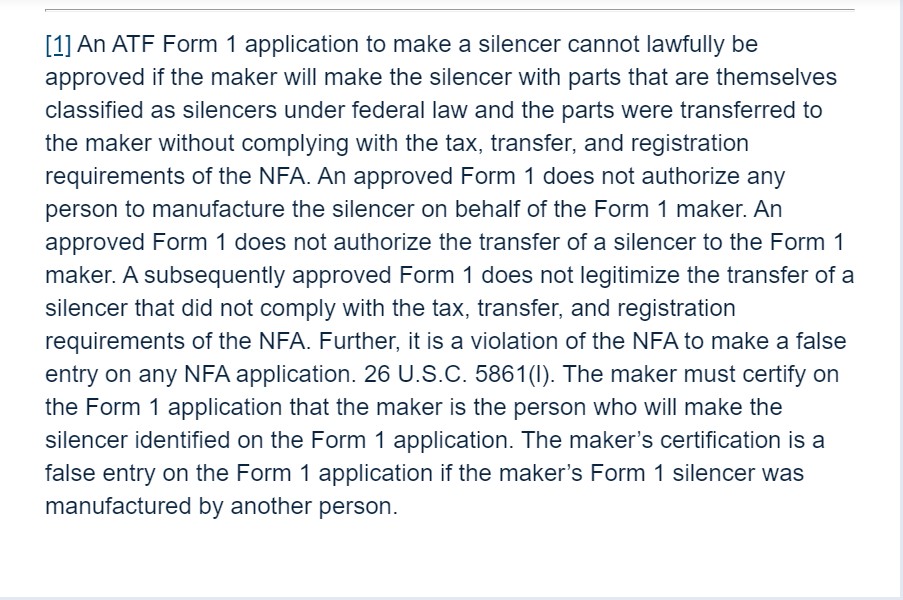 March 16, 2022 – The ATF sent emails to those applicants whose Form 1 suppressor applications were denied as part of the February 28 mass-disapproval.  This email, pictured below, requires that the components be surrendered or destroyed. 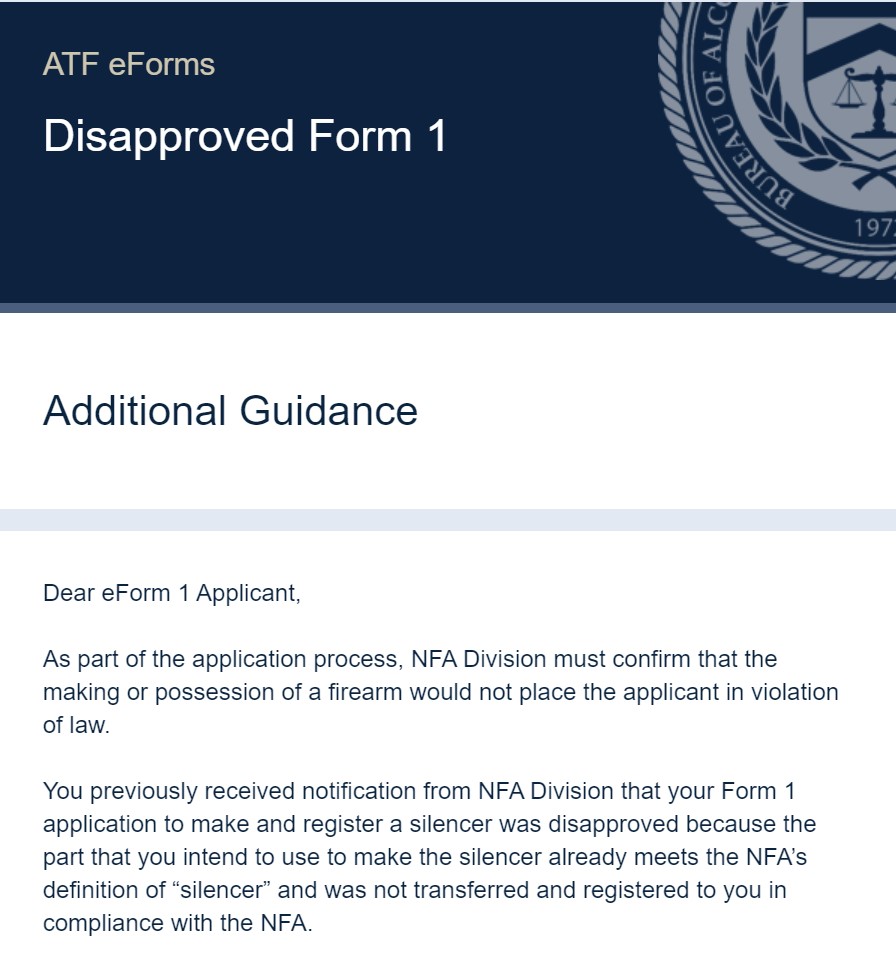 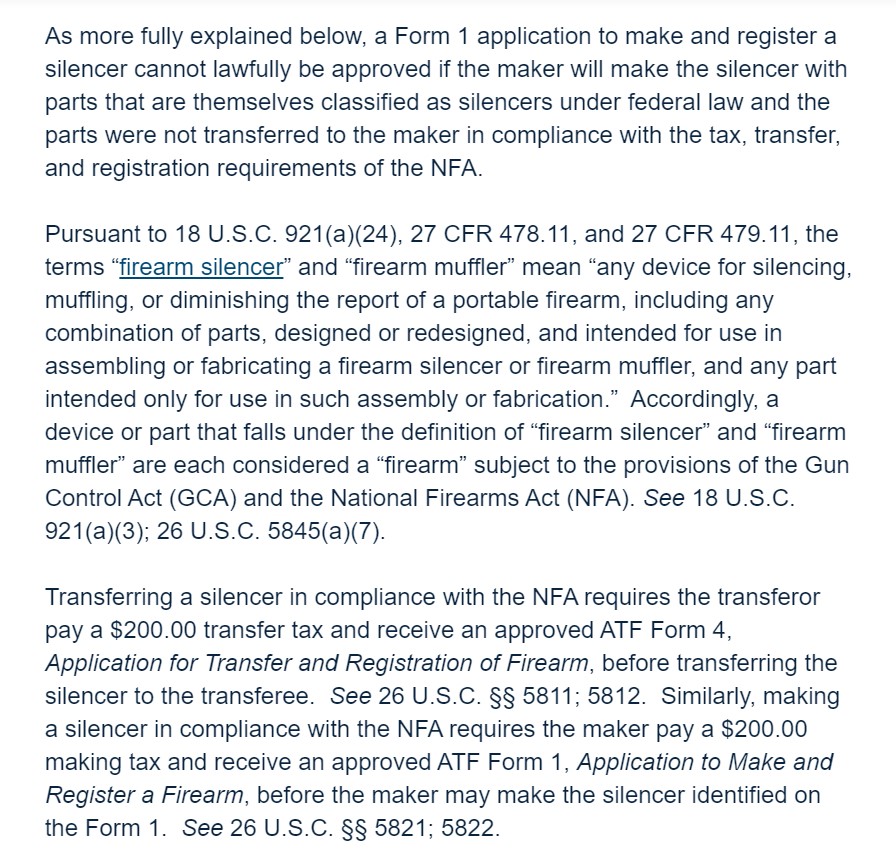 What does the future hold for Form 1 suppressors?

If this interpretation is allowed to stand (and unfortunately the enabling statute is vague enough that the agency will probably be granted deference by the courts in making this determination) then only those who have the lathes, drill presses, 3D printers, CNC machines, or other equipment necessary to create suppressors without intermediary parts will be allowed to submit Form 1s.  All others will be required to purchase suppressors manufactured by licensed manufacturers on an approved Form 4.

Please note that all I have written here is based upon the information I have at the time of writing.  This is a very fluid situation and I will provide updates as more information becomes available.