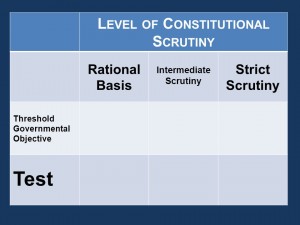 Yesterday I received a call from a friend in Alabama who wanted my opinion on a proposed amendment to the Alabama Constitution which will be on the statewide ballot this election.

The proposed amendment, known as Alabama Amendment 3, is apparently generating a great deal of controversy in the local gun rights community despite being characterized by gun control advocates as an ‘extreme’ pro-gun measure.

Why the concern?  Let’s start with the text of the proposed amendment.

The amendment which, if approved by the voters, would “provide that every citizen has a fundamental right to bear arms and that any restriction on this right would be subject to strict scrutiny; and to provide that no international treaty or law shall prohibit, limit, otherwise interfere with a citizen’s fundamental right to bear arms”, is actually being attacked by certain elements in Alabama as somehow being a back-door gun control bill.

According to a recent news report, those who oppose the amendment believe that “Amendment 3 changes the right to bear arms from one that “shall forever remain inviolate” to one that can be changed so long as the standards of strict scrutiny are met.”

This position is based upon a truly flawed understanding of how constitutional rights are protected by the courts and how the Alabama courts have already ruled on the issue.

My friend asked if I would write an article that could explain the issue in simple terms and I hope the following will assist those not familiar with the issue to better understand why such an amendment would be a powerful protection for gun rights at the state level.

1)  Alabama’s constitution contains a provision which protects the right to keep and bear arms.  Specifically, Article I Section 26 of the Alabama Constitution states “That every citizen has a right to bear arms in defense of himself and the state.”

2)  No constitutional right is treated by the courts as absolute.  In fact, in the 1980 case of Hyde v. City of Birmingham, the Alabama court of appeals seemed to apply a quite liberal standard in analyzing the right:

“… The constitution in declaring that, ‘Every citizen has the right to bear arms in defence of himself and the State,’ has neither expressly nor by implication, denied to the Legislature, the right to enact laws in regard to the manner in which arms shall be borne. The right guaranteed to the citizen, is not to bear arms upon all occasions and in all places, but merely ‘in defence of himself and the State.’ The terms in which this provision is phrased seem to us, necessarily to leave with the Legislature the authority to adopt such regulations of police, as may be dictated by the safety of the people and the advancement of public morals….”

3)  How far the courts are willing to go before declaring that a law violates a constitutional protection is known as the ‘level of scrutiny’.  In the Hyde case above, the court went on to explain where they would draw the line:

“A statute which, under the pretence of regulating, amounts to a destruction of the right, or which requires arms to be so borne as to render them wholly useless for the purpose of defence, would be clearly unconstitutional. But a law which is intended merely to promote personal security, and to put down lawless aggression and violence, and to that end inhibits the wearing of certain weapons, in such a manner as is calculated to exert an unhappy influence upon the moral feelings of the wearer, by making him less regardful of the personal security of others, does not come in collision with the constitution.”

4)  The three basic levels of review are (in order of severity); rational basis, intermediate scrutiny, and strict scrutiny (with other tests being employed for certain rights that are far beyond the scope of this discussion).

Rational basis requires only that the objective of the law be “rationally related to a legitimate government interest.”  When this standard is used, practically any law will withstand scrutiny so long as the government can articulate some vague ‘legitimate interest’ they are serving to protect by passing the law.  In the case of gun laws, this will usually be ‘public safety’.

Intermediate scrutiny is a tougher standard than rational basis and requires that the law being challenged “furthers an important government interest in a manner substantially related to that interest.”  From the Hyde case above, this appears to be the current standard by which gun rights cases are reviewed in Alabama.  It is better than rational basis but not the best for gun owners.

Strict scrutiny is the highest standard or review for fundamental rights.  It requires that the law being challenged “furthers a compelling government interest in a manner that is both narrowly tailored and is the least restrictive possible means.”  This is the gold-standard by which advocates wish all rights to be judged.

Disclaimer:  I am not licensed to practice law in the state of Alabama and am writing this article as an educational tool focused on the general issues of constitutional law. Nothing herein should be construed as legal advice nor does it give rise to an attorney-client relationship.