What to do if you inherit firearms located in another state 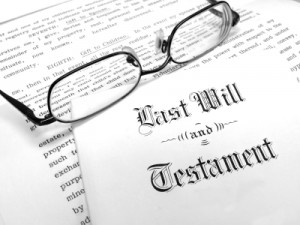 A client contacted me recently and asked how a Virginia resident would legally take possession of firearms (non-NFA) that had been left to him in a will by someone who lived in another state.

He specifically asked whether or not an FFL needed to be involved in the transfer process or if he could simply drive to the other state, pick up the firearms, and return to Virginia.

The answer to this question involves the intersection of three different bodies of law; Virginia law, federal law, and the laws of the state in which the estate is being probated.

Let’s examine the case of a fictional client named Joe who has just been informed that his uncle passed away in another state leaving him a non-NFA firearms collection.  Since he seldom travels to the state where his uncle lived, Joe wants to know if he can pick up the firearms while he is attending his uncle’s funeral.

Let’s start with Virginia law.  Assuming that Joe is not disqualified from possessing firearms, there is nothing in Virginia law that would prohibit him from simply taking possession of the firearms.

Turning to federal law, where one might expect to find a prohibition, we find that 18 U.S. Code § 922(a)(3) generally does forbid “any person, other than a licensed importer, licensed manufacturer, licensed dealer, or licensed collector [from] transport[ing] into or receive[ing] in the State where he resides … any firearm … obtained by such person outside that State.”

So even federal law will allow Joe, who is not a prohibited person, to drive to the other state, pick up the firearms, and return to Virginia.

That leaves only the laws of the state where the firearms are located as a possible concern. We have two primary issues to research about that state; registration requirements, and transportation laws.

While there are relatively few states which have any kind of firearms registration requirement, if the state where the firearms are located does have such requirements then Joe may have to take steps to comply with their rules for disposition of firearms. The attorney handling the estate should be able to help him determine whether a given state has implemented such requirements and how to satisfy them.

Finally, Joe must comply with any transportation laws in the state where the firearms are located.  Having done so, the Firearm Owners’ Protection Act (FOPA), codified at 18 U.S. Code 926A, should protect Joe in the intervening states, so long as he complies with the specific requirements of FOPA.

In short … assuming that Joe does his homework, he should be able to bring his inheritance home with him without ever having an FFL involved.

NOTE:  The rules are quite different for interstate gifts of firearms..