The Obama Administration is pushing for regulatory changes to NFA trusts 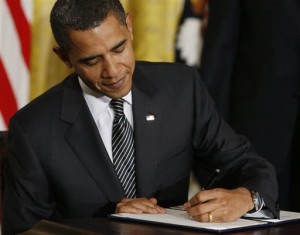 Today The Hill’s regulatory blog reported that the Obama Administration is putting its weight behind regulatory rulemaking to close what they are calling the “gun trust loophole.”

While this administration likes to describe any lawful activity with which it disagrees as a ‘loophole’, the current usage of ‘gun trusts’ is neither a loophole nor a problem.

Rather … it is a solution to a problem that the ATF has known about for some time and has, until now, been unwilling or unable to correct.

Under current ATF regulations, an individual who wishes to purchase an NFA item must submit an application that includes fingerprints, photographs, and a signed statement from the chief law enforcement officer (CLEO) in the applicant’s jurisdiction stating that the CLEO has been informed of the proposed purchase and is not aware of any legal reason the person should not possess the item.

However, in many jurisdictions, the CLEO simply refuses to sign the application, effectively banning all of those in that jurisdiction from legally acquiring NFA items. Rather than fixing this issue, the ATF has allowed this backdoor ban to continue for many years and it is this problem that has given rise to the ‘gun trust’ (or NFA trust) phenomenon.

Why?  Because under current regulations a corporate or trust entity which acquires an NFA item must still submit an application but the fingerprint cards, photographs, and most importantly, CLEO sign-off are not required.

And while the CLEO sign-off backdoor ban was the impetus for the NFA trust movement, it is really no longer the sole reason that these versatile instruments are so popular amongst NFA collectors.

Attorneys across the country have produced instruments that provide significant benefits to the settlor in addition to a simplified application.  A properly formed NFA trust will help protect your NFA items from unforeseen changes in your personal situation, enhance the usability of the items by others you choose, and simplify the passage of the items to your beneficiaries outside of probate.

The proposed rule would do nothing to negate those benefits.  It would simply do 3 things:

1)  It would extend the CLEO sign-off to trusts and corporate buyers as well as individual applicants;

2)  It would require fingerprints and photographs of every “responsible person” in a trust or corporate entity be sent when the applicant is not an individual in order to standardize these requirements.

If this proposed rule becomes law, it will effectively allow CLEO’s to once again enact a de-facto ban on NFA ownership by law abiding citizens.

NFA items are expensive, already heavily regulated, and virtually unheard of in criminal hands.  In fact, to the best of my knowledge, there have only been two crimes committed with NFA items during the last 79 years and one of those was a killing by a law enforcement officer that was later ruled a homicide.  This despite the fact that there are over a quarter of a million legally owned pre-1986 machine guns in the ATF registry and untold tens of thousands of AOWs and suppressors.

Passage of this proposed rule would do nothing to enhance safety but would only add additional bureaucratic roadblocks in front of law-abiding collectors and swamp ATF staff who are already overwhelmed.  The result would be a drastic increase in the processing time for NFA applications and a collapse of the booming suppressor industry.  It is this, I suspect, that is the true goal of the administration.

NFA collectors and gun rights advocates are advised to keep their eyes on this proposed rule. If the report in The Hill is correct, we should expect to see the notice and comment period commence on or around November 20th … and comment we shall!