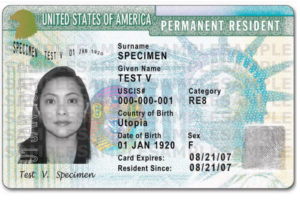 “May I purchase a firearm if I have a green card?”

Some version of this question shows up in my email almost every week.

It is hardly surprising since there is a great deal of confusion concerning green card holders and firearms.

Those who reach out to me are roughly divided into two groups.

The first group has been told that only full-blown US citizens may purchase firearms.

The second group has been told that anyone legally present in the Unites States may purchase firearms.

The two groups have one thing in common … they have both been given incorrect (or at least incomplete) information.

Let’s break this down step-by step:

The ATF notes that “[a]n alien admitted to the United States under a nonimmigrant visa is prohibited from shipping, transporting, receiving, or possessing a firearm or ammunition unless the alien falls within one of the exceptions provided in 18 U.S.C. 922(y)(2)”

So those holding a nonimmigrant visa are generally prohibited from purchasing, receiving, or possessing firearms (I will cover those important exceptions in a later article).

The ATF answers this question as well:

“No. The possessor of a “green card” is a permanent resident and not in nonimmigrant status.”

Let’s look at the relevant question on the ATF Form 4473.

Note that it references instructions for 12d.  In those instructions, it reiterates that permanent resident aliens are not considered nonimmigrant aliens.

To summarize … “May I purchase a firearm if I have a Green Card?”

Assuming you are not otherwise prohibited (felony conviction, etc.) then yes!

I should also note that the ATF makes no distinction between a green card and a ‘conditional’ green card.

DISCLAIMER:  I am only licensed to practice law in the Commonwealth of Virginia.  This advice is focused on federal law and the laws of Virginia.  Your state may have additional (almost certainly unconstitutional) restrictions on firearms ownership by green card holders.