Form 1 is available on eForms once again!

Probably the single question that I am asked more than any other is “When will eForms be back?”  And while I cannot answer for Form 4 applications I can tell you this … Form 1 is back as of today!

In a mid-day email update the ATF announced that, following a number of performance enhancements, Form 1 applications have been returned to the eForms system and that monitoring of the system’s performance under load will determine when other forms will be returned.

Of course I immediately logged into eForms and tried the Form 1 application.  It was significantly ‘snappier’ that its previous incarnation, although I cannot be certain whether that was based upon the touted performance enhancements or upon the fact that it had not yet become widely known that it was available.

If you have been holding onto a build waiting to be able to submit the application via eForms then today is your lucky day!

The remainder of the email also addresses ATF’s efforts to reduce the backlog of applications.

The full text of the email is included below:

We are pleased to announce the following updates to the eForms system:

1.      Performance enhancements – We were able to address some of the technical issues.  You will see improvements in the overall performance of the system.

Below is an update on the status on our processing of paper and electronic NFA applications.  In the future, this information will be available through links on the eForms login screen:

In follow-up to ATF’s letter dated April 16, 2014, regarding the status of the eForms system; this update is being provided to inform the industry of ATF’s progress in addressing eForms and paper NFA applications. To accommodate the substantial increase in application volume that has recently occurred, ATF is working diligently to decrease processing times while continuing to enhance the eForms platform.

What is our progress to date?

From a peak of over 81,000 pending NFA applications at the end of February 2014, as of June 18, 2014, ATF has reduced the number to less than 63,000 applications pending (23% reduction in pending applications).  In the last four weeks, although the NFA Branch received over 17,800 applications we processed more than 22,400 applications. 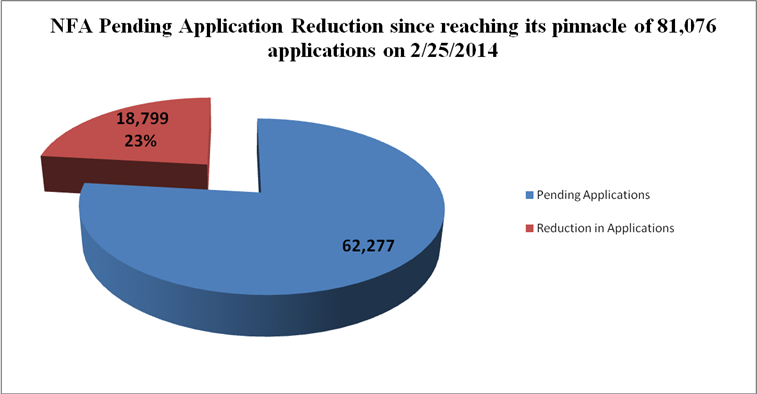 The statistics in the table below represent the processing of NFA Forms over the past four weeks.

At the same time, ATF has directed additional resources to NFA application processing:

If you have any questions regarding any of the information included in this email, you may contact us through the eForms system by using “Ask the Experts” or by emailing us at eforms.admin_atf.gov.

Thank you for your continued support of eForms.