Does the Castleman holding overrule White? 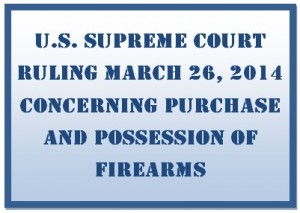 I was contacted by a potential client who had received conflicting advice on whether or not he was now a prohibited person based upon a conviction that was previously held, under the White decision, to not be a prohibiting offense.

For those of you who are unfamiliar with either case, a little background is in order.

In the White case, the 4th Circuit ruled that the federal law which prohibits the purchase (18 U.S.C. 922(d)(9)) and possession (18 U.S.C. 922(g)(9)) of firearms by those who have been convicted of a ‘misdemeanor crime of domestic violence’ did not apply to Virginia cases unless the trial record clearly shows that  “force, greater than a mere offensive
touching” was used during the commission of the crime.

In determining what the term ‘physical force’ meant, the White decision said that it clearly required more than “a mere offensive touching.”  Since Virginia still “retains the common law definition of battery, which includes even the slightest offensive touching as an act of battery,” absent additional findings in the record that the use of force exceeded this threshold, this definition is not met by Virginia cases.  Based upon this opinion, numerous persons were deemed not to be prohibited and their records were marked as such.

Fast forward to March of this year when the United States Supreme Court handed down a 9 – 0 ruling in the Castleman case.  The question presented boiled down to the same definitional quandary … what is meant by the term ‘physical force’ when used in 18 U.S.C. 921(a)(33)(A)(ii)?

In Castleman, the court held that the “‘physical force’ requirement is satisfied by the degree of force that supports a common-law battery conviction — namely, offensive touching.”

Since this holding seems to completely negate the reasoning supporting the White decision, I believe that Castleman does overrule White.

Those who have domestic violence convictions in Virginia who were previously flagged as not prohibited will now be considered prohibited by the Virginia State Police and the federal government and will be subject to possible criminal prosecution if they answer that question incorrectly on a purchase form.

I should note that there are attorneys in Virginia who disagree with this analysis but until we see an opinion holding otherwise, I will advise my clients who are in this situation to seek a pardon as the only available legal remedy.