Does 922(r) apply when building an SBR from an imported pistol? 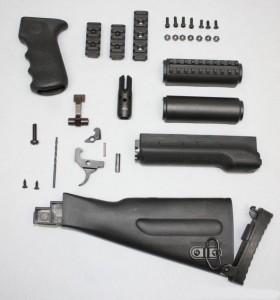 I received a call last week from a client who was planning to SBR a swiss pistol and wanted to know whether the US-made parts requirement of 922(r) would apply.

His concern is understandable since this is yet another area where the ATF seemingly changes their opinion with each letter they issue.

These requirements are part of the Gun Control Act of 1968 which makes it a crime “for any person to assemble from imported parts any semiautomatic rifle or any shotgun which is identical to any rifle or shotgun prohibited from importation under section 925 (d)(3) of this chapter as not being particularly suitable for or readily adaptable to sporting purposes.”

To see if a build based upon an imported pistol would be covered let’s break down the elements of this offense.  In order for a build to be prohibited it must:

Since we are presumably talking about a semiauto pistol, any resulting short-barreled rifle will satisfy the first requirement.  That leaves us with the question of whether the resulting SBR is ‘identical to any rifle or shotgun prohibited from importation under 18 USC 925(d)(3)‘.

Therefore … it seems clear that 922(r) does apply when building an SBR from a pistol.

However … even the ATF has not always held this position.  In a 1994 letter we find the following:

“[T]he lawful making of an NFA weapon would not violate 922(r), since the section only addresses the assembly of ‘non-sporting’ firearms, and not the making of NFA weapons.” 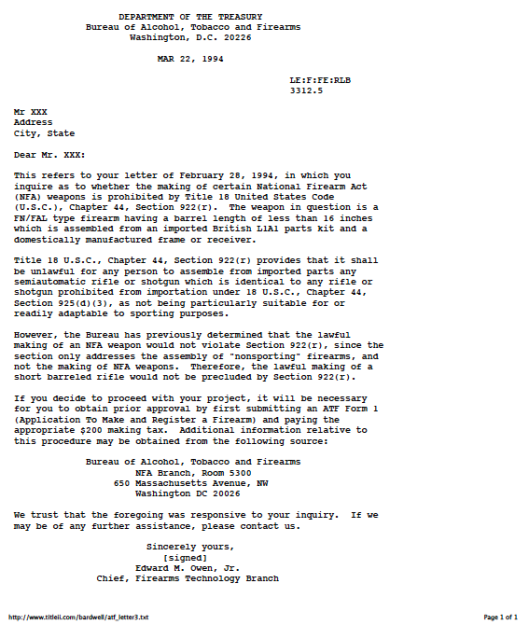 In 2006 the ATF issued another letter which retained this position but seemed to limit it to lawfully imported rifles and shotguns whose original barrels were shortened to make an SBR or SBS. 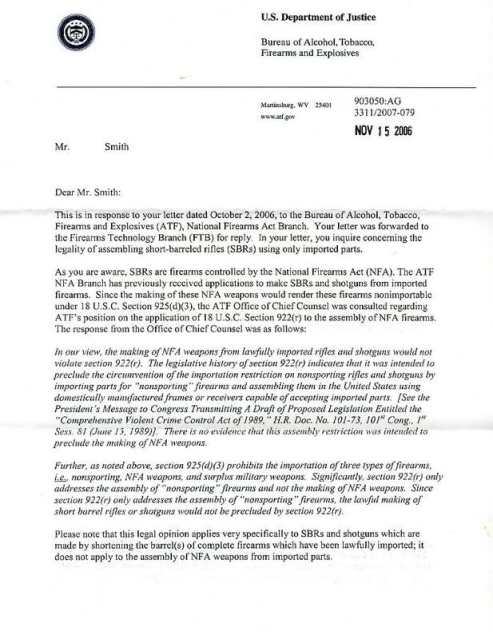 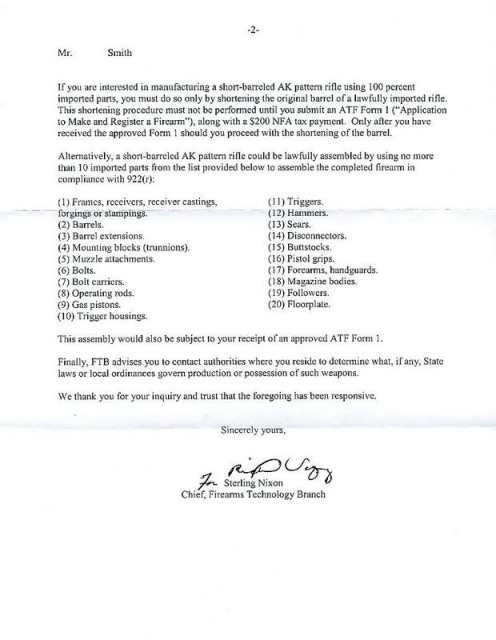 But that was certainly not their last word on the subject.  In 2009 the ATF stated that 922(r) would apply to those items classified as ‘firearms’ subject to the NFA.  They went on to add that if you intend to replace parts on a lawfully registered NFA item that you are bound by the limit of 10 foreign-made parts as codified at 27 CFR 478.39(c). 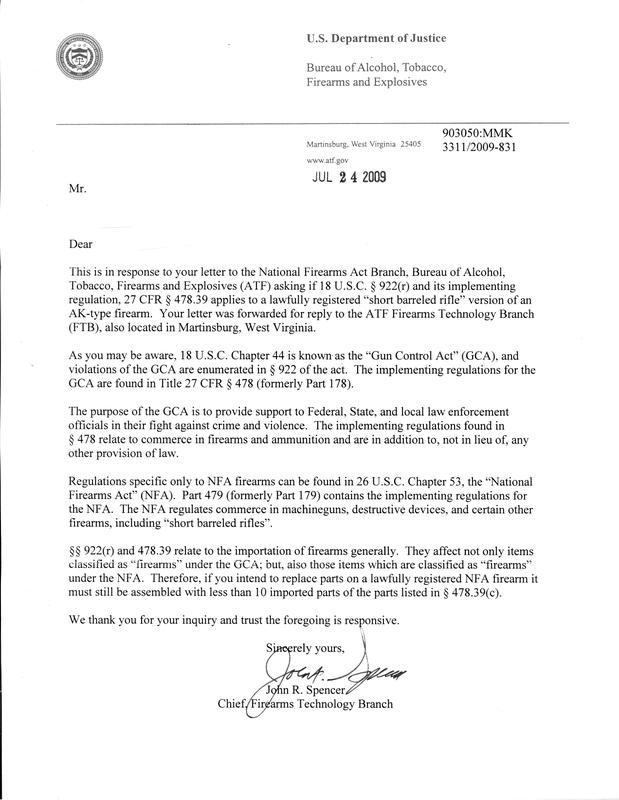 This was followed by a 2010 letter from the ATF in which the original question asked was specifically about making an SBR from an imported pistol.  You will note that the ATF avoided answering the ‘pistol’ part of the question but went on to say that if, in the course of SBRing a rifle, non-importable ‘military-style’ features are added then 922(r) does apply. 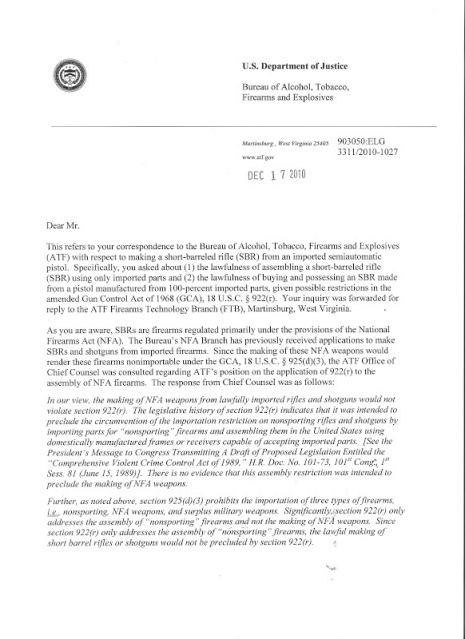 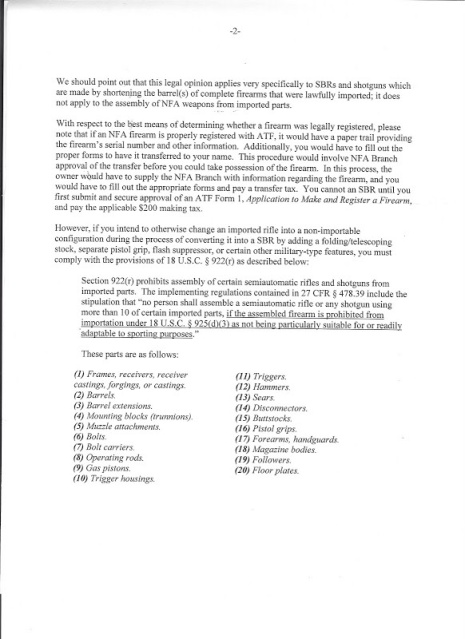 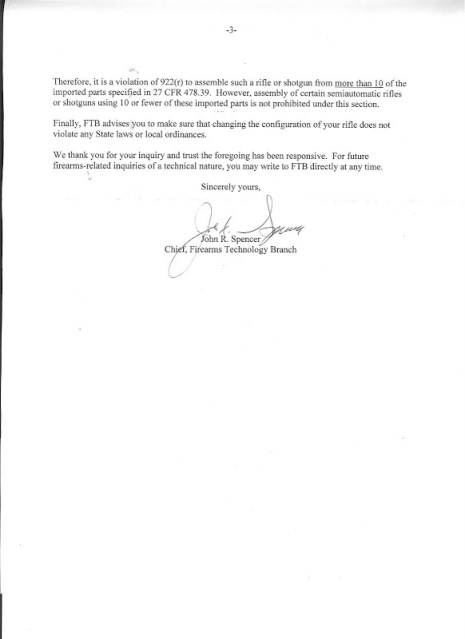 So where does this leave us?

It seems clear both from statutory interpretation and from the trend in ATF guidance that 922(r) does apply to the making of an SBR from an imported pistol.  And while there has not historically been a push to prosecute those whose SBRs violate 922(r), I must advise my clients to insure that their builds are 922(r) compliant.